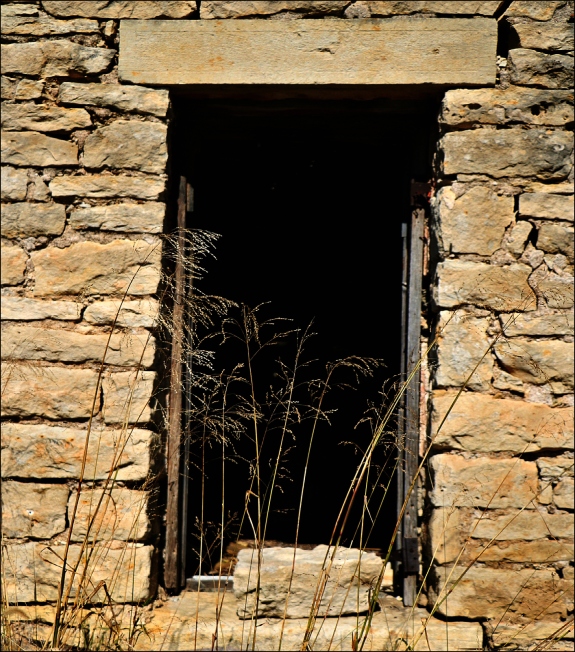 Says a country legend told every year:
Go to the barn on Christmas Eve and see
what the creatures do as that long night tips over.
Down on their knees they will go, the fire
of an old memory whistling through their minds.
So I went. Wrapped to my eyes against the cold
I creaked back the barn door and peered in.
From town the church bells spilled their midnight music,
and the beasts listened –
yet they lay in their stalls like stone.

Oh,the heretics!
Not to remember Bethlehem,
or the star as bright as a sun,
or the child born on a bed of straw!
To know only of the dissolving Now!

Still they drowsed on –
citizens of the pure, the physical world,
they loomed in the dark: powerful
of body, peaceful of mind,
innocent of history.

Brothers! I whispered. It is Christmas!
And you are no heretics, but a miracle,
immaculate still as when you thundered forth
on the morning of creation!
As for Bethlehem, that blazing star

still sailed the dark, but only looked for me.
Caught in its light, listening again to its story,
I curled against some sleepy beast, who nuzzled
my hair as though I were a child, and warmed me
the best it could all night.

Comments always are welcome.
The legend referenced in the poem’s first line also appears in Thomas Hardy’s poem, “The Oxen,” published  on Christmas Eve, 1915, in The Times of London.
I photographed the stone barn in Wabaunsee County, Kansas.

South View of Salisbury Cathedral from the Cloisters ~ J.M.W. Turner

Even in this more secular age, a faint scent of chaos wafts through the last days before Christmas. “I love Christmas,” says the woman squinting at her notebook in the checkout line.  “But I swear — if I never make another cookie, it’ll be too soon.”

I love cookies as much as the next person, but my sympathies lie with the woman. My own preparations have become simpler and less time-consuming over the years. Still, I occasionally find myself thinking, while pulling trays from the oven or standing in line at the post office, I could stand some peace and quiet.

Some quiet would be especially nice. The pressures of the Christmas to-do list are one thing, but the season reverberates with noise to the point of distraction. Hearing Justin Bieber’s version of All I Want For Christmas piped through the produce aisle is more annoying than festive, and the irony of Silent Night drowning out conversation speaks for itself.  While seasonal songs blare away, children nag, parents fuss, and the noise made by impatient drivers circling the shopping mall parking lots sounds for all the world like the honking of a thousand demented geese.

Even the hours meant for sleep are disturbed by the ebb and flow of incessant, internal questioning: What have I forgotten? Who will be offended? Can we afford it?  Will there be time?   It’s little wonder that, by Christmas Day, many are ready to throw out the tree with the wrapping paper and get on with it. Twelve days of Christmas seems a horror. Who needs more Christmas, when what we’ve just had has left us exhausted, disappointed, or drained?

Seasonal excesses aside, most people consider their Christmas pleasures — gathering with family and friends; experiencing the beauty of worship; enjoying the exchange of gifts — to be well worth the expenditure of time and energy they require.

What we rarely consider is that our celebrations take place in the context of a world far older than our customs and more expansive than our plans. The world in which we celebrate turns on an ageless axis, independent of human intent and purpose. Though often hidden, that world can be searched out and surprised; occasionally, it reveals itself in unexpected ways.

I experienced that hidden world some years ago, while on holiday in England. After stopping in London, I traveled on to Wiltshire, intending to celebrate Christmas at Salisbury Cathedral.

Arriving without reservations, I found an inn where I could settle, and soon came to enjoy long conversations with the innkeeper and his wife. Cheerful sorts, bubbly and accomodating as keepers of inns should be, they were filled with practical advice for the holiday-makers under their roof.

Eventually, they discovered I hadn’t planned to make the trek to Stonehenge — “that pile of rocks in a pasture,” as another guest put it. Aghast, they implored, “But you must go to Stonehenge!” When I suggested the site might be better visited in summer, they exchanged a glance that probably meant, “Now see what this poor, benighted American is saying.”

Acknowledging that summer solstice celebrations are more publicized and more comfortable, they detailed the advantages of a cold weather visit. “For one thing,” they said with only a hint of a smile, “in the dead of winter there are far fewer tourists clogging up the roads.” At the time, that was true.

Lured by twin promises of unclogged roads and good conversation, I agreed to make the trip. As we traveled and chatted, they unraveled strand after strand of solstice lore.

While I knew that the winter solstice marks the shortest day of the year, and that on that day the sun descends to its lowest point in the sky, I didn’t know that the word itself — solstice — comes from the Latin solstitium, a combination of ‘sun’ (sol) and ‘a stoppage’ (stitium).

According to one legend recounted by my hosts, not only the sun stops his movement at the time of solstice. Those who happen to be in a silent place, with a quiet mind and stilled heart, may hear the earth herself pause: taking time to catch her breath while she waits for the sun to turn and move, beginning his ageless journey toward the spring.

Charmed by the legend, I became increasingly eager to explore the old “pile of rocks in a pasture.” When we arrived, crowds that had gathered for celebration on the day of solstice were gone. There were no ticket-takers, no vendors, no guides. There was only a strange and forlorn emptiness: a cold sun shining through high, thin clouds,  a tumble of implacable, cold gray rock, and winter-singed grass dusted with snow. Around the circle a cold wind sighed, rocking the single bird soaring high above the plain.

Moving toward the stones in silence so complete I could hear blood beating in my ears, a sense of presence, profound and palpable, gripped my heart. Suddenly anxious, no longer certain of our solitude, I turned as if to confront an assailant. No one stood behind me. There were only the rocks, the sky, and a hush of wind singing across Salisbury plain.

Each year as darkness deepens, as days grow shorter and the sun hastens  toward its solstice turn, I remember Salisbury plain: the stones, the silence, and the song. At the time, I hardly imagined that my first experience of that deep and richly textured silence was not to be my last.

Blessedly, such experiences depend neither upon the stones of an ancient culture nor the shades of a people lost in time. A sense of presence, an experience of deep connection to the larger world in which we live, seems intrinsic to life itself. It comes to us as birthright, although there is no predicting how or where it will appear.

Wherever the mystery of connectedness surprises us — in a snowstorm-emptied New York street or a mist-shrouded grove of redwoods; at a baby’s crib or a parent’s grave; in an empty classroom or in an overflowing church — its nature is unmistakable.

If you came this way,
Taking any route, starting from anywhere,
At any time or at any season,
It would always be the same: you would have to put off
Sense and notion. You are not here to verify,
Instruct yourself, inform curiosity
Or carry report. You are here to kneel
Where prayer has been valid. And prayer is more
Than an order of words, the conscious occupation
Of the praying mind, or the sound of the voice praying.
And what the dead had no speech for, when living,
They can tell you, being dead: the communication
Of the dead is tongued with fire beyond the language of the living.

There will be no Stonehenge in my travels this year, no moment of wonder in the emptiness of a windswept English plain. But the sun is lowering, and the pause will come; soon enough, the solstice will arrive. If we are wise, we will find a bit of space, a little emptiness, some moments of silence in the midst of our over-filled lives to embrace its coming and its promise.

Preparing for ourselves a room built of the very solitude and silent attentiveness that so often eludes us, we may well find that, as surely as the sun stops and the earth breathes, the same wind singing silence over our world’s cold-singed plain will touch our hearts with its strange, vertiginous joy.

Josephine Baldizzi arrived in this country as a young girl from Sicily. Her family lived on New York’s Lower East Side from 1928 to 1935, their home a small tenement apartment at 97 Orchard Street.

During the Depression, there was no money for Christmas gifts or decorations, so her father, Adolfo, scavaged through their neighborhood for discarded pine branches from other peoples’ trees. Putting his carpentry skills to work, he drilled holes into a piece of plain board and then, using the branches he’d collected, created a Christmas tree for his family. END_OF_DOCUMENT_TOKEN_TO_BE_REPLACED 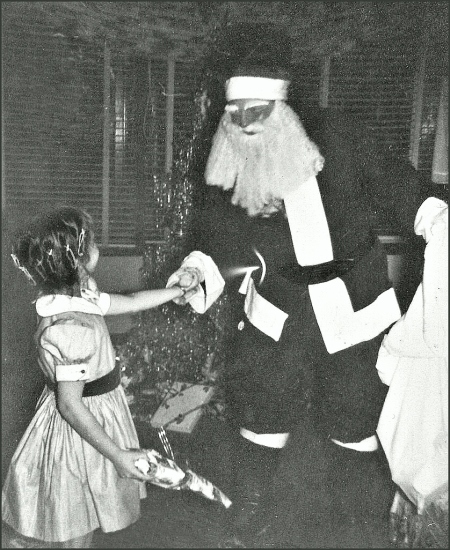 From the time I was old enough to recognize him, until well past the time most children would have been done with such things, Santa visited our house on Christmas Eve.

The first present I received from him, a floating rubber bath duck with a hollowed-out back meant to hold soap, both thrilled and terrified me. Delighted by the gift, I feared Santa’s early visit would mean no presents under the tree in the morning. END_OF_DOCUMENT_TOKEN_TO_BE_REPLACED

Perhaps she noticed my absence. More likely, she felt a draft from the partly-opened door and came out to investigate. Whatever drew my grandmother onto the porch that cold Christmas night, she discovered a quilt-wrapped, shivering, unhappy litle girl huddled on her front steps.

“Well, for heavens’ sake,” she said.”What’s the matter? What are you doing out here?” “I don’t want to go home,” I said. “Of course you don’t,” she said, sitting down next to me on the step. “It was a nice Christmas. Did you have fun? Did you like your presents?” Unwilling to look at her, I murmured the complaint voiced by generations of children. “I wish it wasn’t over.”
END_OF_DOCUMENT_TOKEN_TO_BE_REPLACED

New on Lagniappe ~Putting the Metal to the Petals

The text and photographs on this site are the property of Linda Leinen. You may link to these articles but may not use the photographs or text without written permission. In the case of images used here with permission, the copyright resides with the original photographer.
The Task at Hand
Loading Comments...