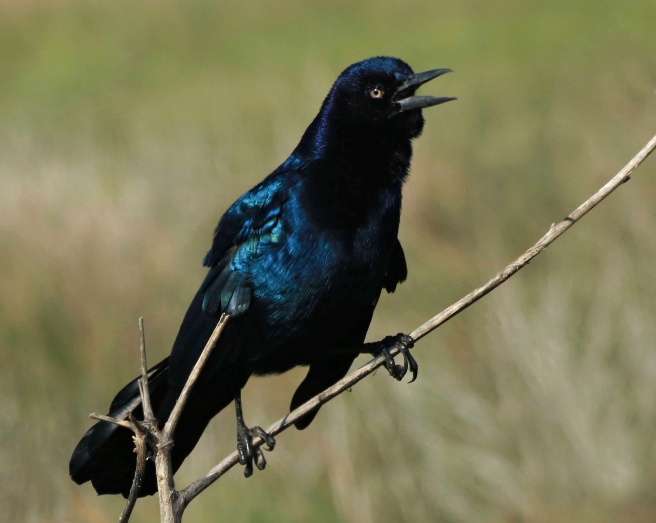 Boat-tailed, Common, and Great-Tailed Grackles appear across Texas, their populations ebbing and flowing as the seasons change. Chattering among themselves, providing amusement to humans during mating competitions, and generally showing off to one another, they’re exceedingly social birds.

In fall and winter, enormous flocks of Great-Tailed Grackles gather in ‘roost trees’ that sometimes contain thousands of birds; their morning flights show up on radar as expanding ‘doughnuts’ called roost rings.

Other birds, especially Purple Martins, often create the same effect. In Houston, there are locations where the various birds’ morning routines are so well known that people click on the radar just to watch and record. (For a beautiful animated .gif of a Houston roost ring, click here.)

Great-tailed Grackles don’t limit themselves to trees, of course. They’ll also fill electrical lines in the early evening or, in the case of my neighborhood, take over our local HEB grocery store. When the birds move in, there’s nothing to be done but laugh. They line the store’s rooftop and perch atop cart returns, but they also wander under and over cars, sit on SUV luggage racks, ride on grocery carts being pushed by bemused shoppers, and search through the outside garden displays for the occasional insect.

Poet Susan Elizabeth Howe has perfectly described their behavior and captured something of their mysterious appeal in her poem titled, “What Is a Grackle?” I don’t think she visited my supermarket while writing it, but she certainly could have.

A comfort common to Southwest desert
parking lots, a familiar, a messenger,
an overlooked angel oiled by asphalt,

consolation of the casino, supermarket
spiritual guide picking at a free-today
hot dog, a dropped grape or lentil,

its purple-green head iridescent,
its long keel of a tail.
Black birds but not blackbirds

with their showy epaulettes blood-red
as a war field. Grackles glint
like lacquered ebony, the females brunhildas,

if by brunhilda you mean “brown-headed,”
not the German “ready for battle.” Blind
to centuries of borders, of battles, they waddle

stiff-legged at your feet, a janitorial sweep
to their tails, checking cart tires and light poles
for moths, beetles, singing their seven songs —

payments spun to mist at a roulette table,
the beloved who breathed fire and scorched
your wedding clothes. Folly, wreckage,

they mutter, down among the packs
of backerboard and spackle. We’ve fallen
from Mayan temples. In a past life
we prophesied. In a past life we were gods.