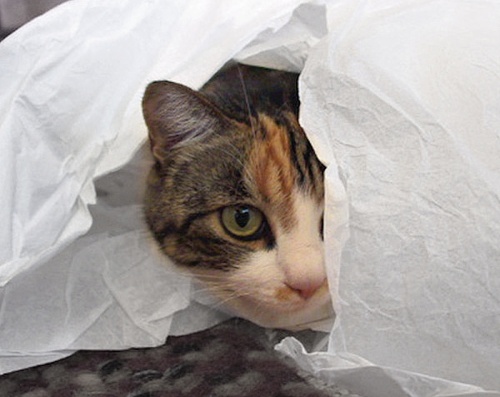 Grown to middle age, my calico became placid and content, spending her days in search of perfect napping spots, or indulging in bird-watching at the window. Long past the enthusiasms of kittenhood, her favorite excitement was shredding cheap tissue paper. She preferred white, although she’d work with colored if necessary.  Each Sunday morning, I gave her a dozen sheets. For the next week she rolled in it, hid under it, buried toys in it, or clawed at it until nothing remained but a flurry of shreds.

Despite her even temper, she disliked every sort of storm. Lightning would bring her to electrified attention, while thunder tripled the size of her tail in a flash. Approaching winter cold fronts set her pacing for days. She was my best prognosticator. Once a low crossed the Red River, she began moving restlessly from room to room. By the time it got to Dallas, she’d be tearing full-tilt through the house, circling around and around until collapsing in a heap.

She survived several tropical storms and two hurricane evacuations, and what she lacked in scientific knowledge she made up for in pure instinct: she knew storms are bad. When her people began to fuss and mutter about systems still hundreds of miles away, she headed to her carrier, ready to snuggle down and wait it out: wide-eyed and anxious, uttering the low, undeciperable sounds she reserved for rising storms.

We had much in common, that cat and her people. On the other hand, when storms brew, the air is charged with as much anticipation as anxiety.  Conversations grow a little louder, chatter becomes more insistent. As weather bulletins increase in frequency, questions become more pointed, and attention more focused.

Some want the storm to turn, to dissipate, to wander and die, but others are equally eager to see what nature has up her sleeve this time. We’re like children convinced goblins are living in the closet. Consumed as much by curiosity as by our wonderful terror, we wouldn’t mind the chance for just one glimpse.

This strange combination of fear and fascination accompanies winter storms, as well as hurricanes. Nor’easters, blizzards, white-outs, ice: we hate the interruptions they bring to life, the complications, the immobility. And yet a compulsion overtakes us, an insistent need to feel nature’s effects, to walk, to measure, to experience the howl of wind and the hush of new-fallen snow. We become spellbound as much as snowbound, in thrall to the swirl of the storm.

The night is darkening ’round me,
the wild winds coldly blow;
But a tyrant spell has bound me
and I cannot, cannot go.
The giant trees are bending
their bare boughs weighed with snow.
And the storm is fast descending,
and yet I cannot go.
Clouds beyond clouds above me,
wastes beyond wastes below;
but nothing dear can move me;
I cannot, will not go.

Brontë had it right. As much as the storms of summer, winter storms can be compelling, exciting and beautiful. Unfortunately, winter is more than storms. Vita brevis, ars longa, as the saying has it. But on this side of Solstice, vita brevis, ars longa, et hiems longior seems more appropriate: life is short, art long, and winter even longer.

December passes quickly enough with celebration and holiday distractions. Even during a pandemic, January arrives with all the hopes of a New Year: a sense of renewed purpose and optimism. But winter is winter, a season of sighing, and waiting, and longing for an end to cold, darkness, and a similitude of days.

As the exultation of Brontë’s storm passes, the endurance of winter begins. It resembles the patience of a sickroom, the shock of unexpected absence, the tedium of sleeplessness. A sense of endurance seems to mark even the natural world as it waits in quiet resignation for the turning to come: a turning marked by lengthening days and increasing light. 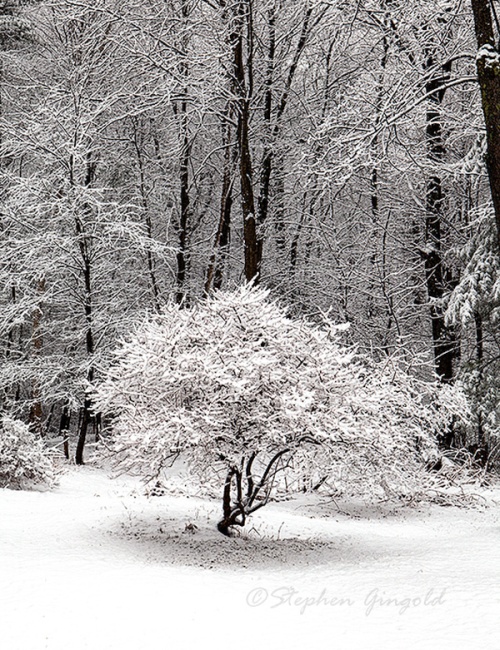 The bleakness of mid-winter leaves the world strangely quiet. Wraith-like creatures leave only tracks in freshly fallen snow; sun and moon alike leave only shadows as evidence of their passage.

For the watchers from the windows, for the walkers beneath the moon, for every harsh and glittering star reflected in the sparkle of the snow, time seems to stop. Brontë herself might invite us to stop, and turn, leaving our accustomed roads for a more poetic path. Come along, she seems to say. Enjoy a winter’s walk.

The Grammarian In Winter

Winter speaks in passive voice,
conjugates brief slants of light,
parses out cold stars along a tracery of oak.

Split by ice, the pond breathes smoke.
Split by cold, the blackened ferns release their shattered fronds.
Split by hoarfrost, fences bend and crack across the cold-boned land.

Silent, shrouded by the pond’s slight breath,
clear-eyed herons sweep the snow
as if to scry its source;
their spellbound cries declaim the day,
punctuating dim and drifting hills.

Watching the snow fall across the country, I was moved to edit and republish one of my own favorite posts.
Steve Gingold kindly provided images of the snow and ice. For more wonderful winter photographs, visit his website.

127 thoughts on “Spell-bound in Winter”