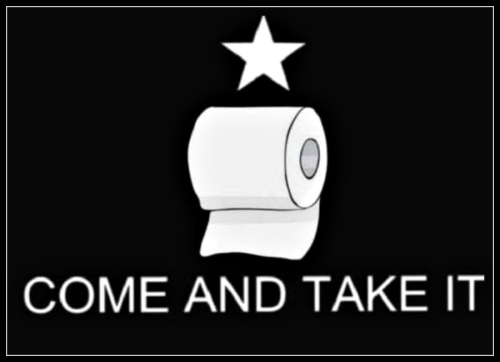 If you’re a native Texan, you’re already laughing. If you’ve adopted the state as your own, or know some Texas history, you’re probably laughing, too. This adaptation of one of our most well-known state symbols — the so-called “Come and Take It” flag — is flying free these days: amusing, yes, but also a cheeky bit of inspiration for those who remember its history.

Only last month, I visited a site intimately connected to the original “come and take it” event. About a mile east of the unincorporated community of Cost, the first shot in the war for Texas independence was fired on October 2, 1835. Alongside the highway, an impressive monument commemorates the event. Dedicated by Governor James Allred on March 14, 1937, its inscription summarizes the tale: 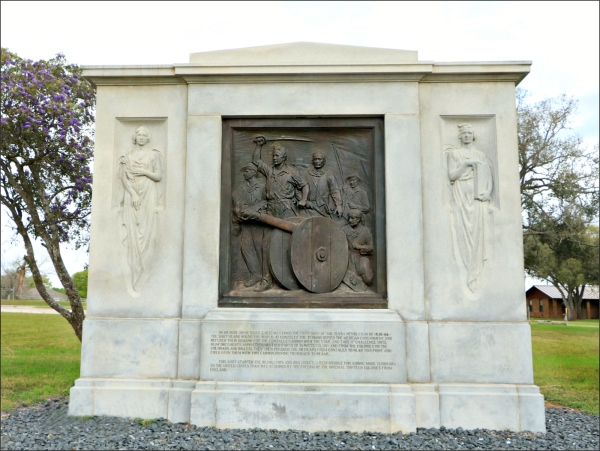 Near here on October 2, 1835, was fired the first shot of the Texas Revolution of 1835-1836, the shot heard round the world. At Gonzales, the Texians defied the Mexican government and refused their demand for the Gonzales cannon with the Come and Take It challenge, until reinforcements arrived from other parts of DeWitt’s colony and from the colonies on the Colorado and Brazos. They then pursued the Mexicans from Gonzales to near this point and fired upon them with this cannon, driving them back to Bexar.

If, after admiring the monument, you were to take the road winding away from the highway into the country, you’d first pass some local ranches paying their own tribute to local history.

Then, in the midst of live oaks and pecans, you’d find another monument to that “shot heard round the world.” Funded by Gonzales school children in 1908, it’s thrilling in its simplicity, and a fine reminder of a story that’s assumed mythic proportions over the years.

Long before the 1835 skirmish broke out between Mexican soldiers and Texian militiamen at Gonzales, tensions among various factions in the area — Spanish royalists, Mexican revolutionaries, Anglo settlers, and waves of independence-minded and land-hungry immigrants — had led to remarkable changes.

Before formalizing Mexican independence with the signing of the Treaty of Córdoba on August 24, 1821, Spain granted Moses Austin permission to found a colony of Anglo settlers in Texas. Austin died on June 10, 1821, but before his death he charged his son, Stephen, with the task of continuing the work of colonization.

Reluctantly, Stephen agreed, only to find himself  himself embroiled in a series of complex events.

First, Agustín Iturbide, chosen by the Mexican revolutionaries as a military leader, celebrated independence from Spain by dissolving the Mexican Congress and declaring himself August I, Emperor of Imperial Mexico. Despite reaffirming the legality of Austin’s colony on January 4, 1823, Iturbide was forced into exile on March 19 by a group of army officers, including Antonio López de Santa Anna.

After Iturbide’s abdication, the colony law was annulled, but Austin once again managed to have it reinstated, and his three hundred family colony became a reality. By 1832 Austin’s colonies included 8,000 people, despite Mexico’s imposition of immigration limits in 1830 after hearing rumors that the United States was considering annexation of the region.

In 1835, a caretaker government headed by Valentín Gómez Farías eliminated the law limiting immigration to Texas, and lifted restrictions on land speculation. As the number of new settlers increased, so did the level of discontent. Taxes and tariffs were a point of contention, and the re-opening of customs offices at the ports of Velasco and Anahuac was particularly offensive.

The history of the battles, surrenders, retreats, and trickery at both ports is complicated. When Mexican General Martín Perfecto de Cos made known his intention to arrest William Barrett Travis for his role in the Anahuac Disturbances — an uprising of settlers — in June of 1835, and asked the Texans to hand Travis over, they were unwilling to do so. Needless to say, their refusal irked the Mexicans.

Two months later, Stephen Austin returned to Texas from his own stint in a Mexican jail.  After presenting President Santa Anna with a proposal to grant Texas separation from Coahuila, he’d been imprisoned for inciting insurrection among the colonists; he was able to return to Texas via New Orleans only after being freed by a general amnesty in July, 1835.

Upon his return, he found many had come to favor a clean break with Mexico, partly because of Santa Anna’s annulment of Mexico’s 1824 Constitution. Federalist in nature, it had guaranteed certain rights to the states, and its annulment caused many to believe their rights would be further curtailed.

On August 20, the the citizens of the Jurisdiction of Columbia circulated a broadside calling for a Consultation to be held at Washington-on-the-Brazos on October 15, 1835 to discuss the escalating friction with Mexico, and consider options for more autonomous rule for Texas.

Fully aware of restlessness among the Texians, Mexican authorities began taking steps to prevent further trouble, including the reclamation of armaments which had been made available to the colonists.

On January 1, 1831, Green DeWitt had written to Ramón Músquiz, political chief of Bexar, requesting a means of defending Gonzales colonists against hostile Indians. On March 10 of that year, James Tumlinson, Jr., a DeWitt colonist at Bexar, received and signed for a bronze cannon meant for Gonzales, given with the stipulation that it would be returned upon request. When the Mexicans asked for the return of their cannon in September, 1835, the colonists declined.

This either is, or isn’t the actual “Come and Take It” cannon, displayed at the Museum in Gonzales ~ Opinions differ.

After learning that Gonzales refused to surrender the cannon, Domingo de Ugartechea, military commander in Texas, dispatched Francisco de Castañeda and a force of a hundred men to retrieve it. Castañeda’s meeting with the Texans was less than successful. When he requested the cannon be returned, the Texans pointed to the gun, about 200 yards behind them, and said, “There it is. Come and take it.”

After a few days spent maneuvering, the Mexican forces skirmished with the local militia, led by John Henry Moore. Though Castañeda and his men retreated, the event was reported across the country as the first battle of the Texas Revolution. While hardly a significant battle (two Mexicans were killed, and one Texian suffered a bloody nose after being thrown from his horse), the encounter did serve as a potent symbol of the final break between American colonists and the Mexican government.

For their battle flag, the Texians adopted a design created by Cynthia Burns and Evaline DeWitt: a single black star, an image of the disputed cannon, and the phrase “Come and Take It.” There are suggestions the flag may have been carried by Stephen F. Austin’s volunteer army to the siege of Bexar. As DeWitt colonist Creed Taylor recalled:

About this time, on the tenth, I think, Stephen F. Austin arrived at our camp and was given quite an ovation. All looked upon the great man as a wise councilor and a safe leader, and so he was unanimously chosen as our commander-in-chief with the title of general.

To heighten the excitement and arouse further enthusiasm, at this juncture the general received a message from Colonel Cos, at Bexar, saying that he was coming to Gonzales with a large force to recover that cannon. When this news was circulated among the boys their enthusiasm was raised to the highest pitch. “Let them come and take it,” became the cry.

Like Goliad garrison commander Phillip Dimmitt’s “bloody arm flag,” raised in the quadrangle of Presidio La Bahia in December, 1835, both the “Come and Take It” flag and the cannon eventually gave way to other symbols of the new Texas Republic. Even so, the spirit they represent lives on; in Texas, it’s hard to escape the battle cry, or the symbols of that early history.

Over the bar at Frank, Austin, Texas ~ Photo by Seth Anderson

As a personalized Texas license plate

I wasn’t born Texan, but I got here as fast as I could ~ with the help of Come and Take It Movers

And now, Texans are defending their stashes of toilet paper with the same verve and determination that once marked their defense of a cannon. It’s hard not to wonder what heroes like Austin, Fannin, Travis, Seguín, Houston, and Bowie might think about this new adaptation of their revolutionary symbols.