She hangs in my kitchen, this nameless woman holding a chicken in her lap. She watches me move between stove and sink, and I return the favor, attentive to her placid presence.

Over time, I’ve come to know a thing or two about her. The directness of her gaze tells me she isn’t afraid of being seen. She’s as busy as any modern woman: her apron tells me that, and her distinctly practical hair. She didn’t mean to turn away from her chores to pose for the camera on that morning, but when asked, she cooperated: perhaps happy for a moment’s rest.

Surprised, made wary by her inexplicable behavior, the dog presses close, protective and alert. Still, they’ve spent his lifetime together, and her hand calms his fears.

Around her portrait, scraps of ephemera provide clues to the nature of her world. An invoice from A.E. Want & Company, one of Ft. Worth’s premiere wholesale grocers at the turn of the last century, is dated September 14, 1921, nine years after the company gained a certain notoriety by suing the Missouri, Kansas & Texas railroad over a carload of frostbitten Minnesota potatoes. The potatoes, valued at $155.87, were judged defective, and the railroad was ordered to pay.

At her feet, a decorated business card announces Mr. A.D. Perry, a “reliable seedsman” from Syracuse, New York. And in the background, covered with penciled notations suggesting the quick, calculating mind of a business-like woman, are the music and lyrics to a nearly-forgotten American standard: Sweet Betsy from Pike, a song still able to convey all the humor, grit and tenacity of American pioneer women across the decades. 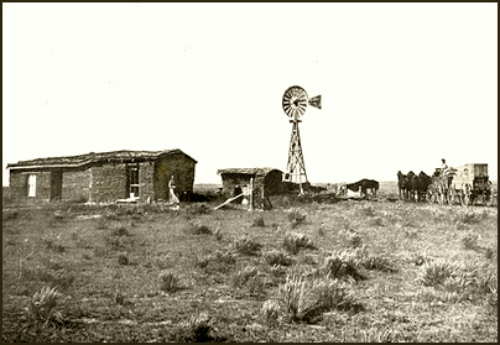 I call my kitchen companion Betsy, because of the song. Debbie Little-Wilson, the Texas artist who created the collage, titled it She Made Her Own Groceries, and indeed Betsy did. Flour, sugar, and salt may have made their way to her through Mr. Want’s wholesale company, but vegetables and fruits came from the seeds she ordered from Mr. Perry, received in trade or saved from her own crop. Milk cows were common, and game was plentiful. As for eggs, the chicken in her lap suggests their source.

In Texas, the abundance described by John Milton Hadley in 1855 also would have surrounded her:

The supply of wild fruits exceed that of any country I ever knew. Straw- rasp- goose- blackberries grow plentifully. Plums — persimmons — crab apples — wild cherries and grapes also abound. There is an unlimited extent of hazel nut thickets, and hickory trees are found and walnut — besides most other mast-bearing timber — All which are apt as I’m told to be very productive. Hence, thee can have “nuts” to crack. Now, I have not been over the territory and can not tell from my own sight what the afect [sic] of it presents, but there is variety in everything I learn as everywhere else.

Challenging as Betsy’s life may have been, it was a life marked by freedom as well as by hardship: a life constructed through choice and shaped by circumstance. Looking at her, I think of Mrs. Crooks, whose beautifully penned letters to my great-great-grandmother Annie are among my own treasures. One, dated May 19, 1881 and written in Poplar Hill, Kansas, found its way to Annie’s new home in Chariton, Iowa:

Crops are usually good and vegetables of all kinds in abundance. We have had lettuce, onions and radishes from the garden and soon will have peas. There will not be much fruit this year, the severity of the weather killed the peaches [and] the apple orchards are not many in bearing yet.

Elmer is farming — 300 acres in wheat, 75 in corn, about 5 in potatoes, early corn and vegetables. How are you and Mr. Crowley? Does he sigh for Texas when the cold north winds blow and the snow and ice is plentiful? Is it hard to wean him from the land of sunshine and flowers?

Elmer sends his best wishes to you all and we both hold you in grateful remembrance for your kindness to us while on our way to Kansas.

Today, Poplar Hill has disappeared. The post office where Mrs. Crooks would have mailed her letter closed in 1889. As for Chariton, the Lucas County town where Annie’s husband David helped organize the 34th Iowa Infantry at the beginning of the Civil War, and in which they settled after their post-war years in Texas and Missouri, it remains home today for David and Annie; for their children and grandchildren; for their great-grandchildren and more, resting in the heart of the land that sustained them.

They weren’t perfect, these forebears of ours who made a country. They had their own share of strange ones and lazy ones, and for many families the liars, cheats, and thieves became the stuff of legend. But they knew how to break a prairie and plant a crop, how to build shanties of sod and lay rails of steel. They mined the coal and laid the roads, built the schools and educated their children, birthed their babies and buried their dead, and against all odds made it work by virtue of their resilience and stubborn determination.

Were mistakes made? Of course. Were they always successful? Of course not. But even in the face of failure they loved their country and cherished their independence. Remembering grandparents and great-grandparents who fought and died to ensure their freedom, they lived out their days counting the cost of self-evident truths and and inalienable rights. They preserved and planted the seed of liberty with as much deliberation as they planted their corn and peas, and brought in its harvest with equal delight.

As surely as Betsy made her own groceries, they made their own country, tending to the responsibilities and hard work of citizenship with diligence and care.

My mother and her baby sister, gaining independence on their grandparents’ farm

Reflecting on the founding of this nation and the responsibility we bear for its continuation, I find myself uneasy, sensing a change of focus, a societal shift, a seeming determination to institutionalize dependence at every turn.

Increasingly, we are told we cannot be trusted with our own lives: with our health, our children, or our economic decisions. We are told we do not have the strength, the tenacity, or the wisdom to weather the storms of life or deal with its catastrophes.

We are assumed to be too frail to accept the realities of life, too ignorant or uneducated to understand them. We are assured that only the self-appointed experts among us have the knowledge or skill to set the parameters of our lives, while those who know nothing about us demand that our youngest, our most frail, and our aged have the conditions of their lives determined by governmental fiat rather than by the loving decisions of supportive families. When curiosity, conviction or the quest for a better life leads us to strike out in new directions, far too often our progress is impeded by barriers put in place by those convinced we have no right to chart our own course.

No doubt each of us has taken risks that ended in great reward and engaged in risky behavior that brought unhappy consequences. We have been wrong about individuals and supported bad policies, but we also have been right about people and causes and benefited greatly because of it.

Some of us live financially comfortable lives while others constantly are scrounging for a few more dollars. Some of us have achieved our goals, while others continue to press on. But through it all and however imperfectly, we sense that growth and maturation is the point of life. The independence of adulthood is meant to replace the natural dependence of a child, and, in the end, it is the willingness to accept both risk and responsibility that brings life’s greatest rewards: to nations as well as to individuals.

Today, questions abound. Are we willing to exchange the rewards of risk for the poor substitute of comfort? Will we choose passivity over active participation in our life and governance? Will we forego excellence in favor of mediocrity? Will we fall victim to those who play on false or unreasonable fears, or will we be courageous? Will we allow ourselves to be made dependent, or will we look for strength to those who understood the power of self-determination; who had a vision of true independence; and who preserved a nation for us through their effort and their will?

Time will tell. But Betsy, straightforward and serene, stands as a reminder. Her legacy can be ours, should we choose to accept it.

Some of my own family’s nation-builders