Josephine Baldizzi arrived in this country as a young girl from Sicily. Her family lived on New York’s Lower East Side from 1928 to 1935, their home a small tenement apartment at 97 Orchard Street.

During the Depression, there was no money for Christmas gifts or decorations, so her father, Adolfo, scavaged through their neighborhood for discarded pine branches from other peoples’ trees. Putting his carpentry skills to work, he drilled holes into a piece of plain board and then, using the branches he’d collected, created a Christmas tree for his family.

He would make his own tree, shape it, tie it to the wall, and then get ornaments and dress it all up.There were glass ornaments, some lights and tinsel. For the children, there was a tray filled with traditional holiday treats – marzipan, dried fruits, walnuts, chestnuts, and oranges.

It was, she said later, both memorable and magical.

Josephine was my parents’ age, and in many ways her story was their story. Still, by the time my parents and I began celebrating Christmas as a family, the Depression had passed. Fresh, fragrant Christmas trees were commonplace, and the excitement of presents was real.

If any Depression-era habits lingered, they involved holiday decorating. We cut paper snowflakes for the windows, and pasted strips of old magazines into colorful chains. We spent evenings stringing popcorn and cranberries into garlands for the tree; sometimes we molded tin foil around thimbles, and hung our glittering bells among the garlands.

Over the years, increased prosperity brought changes to the weeks before Christmas. More parties were held, and purchased decorations became more elaborate. Competition developed among neighbors seeking to outdo one another’s outdoor lighting displays, and the phenomenon of the ‘must-have’ toy began making parents’ lives miserable. By the time the first before-Thanksgiving Christmas tree lighting took place, we already were on the slippery slope, and sliding fast: toward Black Friday, box store riots, and arguments over which seasonal greeting is most offensive.

After my mother’s death, the need to maintain every holiday tradition that had been important to her became less pressing, and I began exploring new ways to mark Advent and Christmas. By chance, a remarkable story from Hong Kong aided that exploration.

Located in Sham Shui Po, one of Hong Kong’s eighteen Administrative Districts, Shek Kip Mei was the first resettlement estate built after a tragic squatter fire on Christmas Eve, 1953 left approximately 50,000 people homeless. Refugees from Mainland China, they had been living on mixed agricultural and Crown land just north of the Walled City of Kowloon, itself the site of a squatter fire in 1950.  While there is disagreement about the nature of the government’s response to the tragedies, there’s no question the beginnings of Hong Kong’s revised housing policies can be traced to the Shek Kip Mei fire. 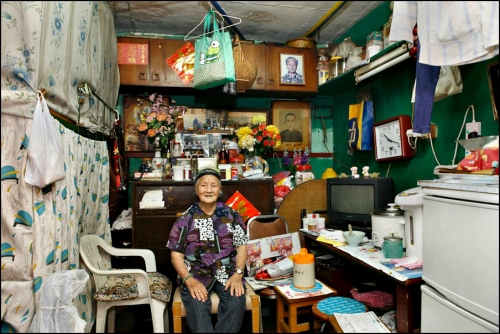 In April of 2007, shortly before residents were to begin moving out in advance of Shek Kip Mei’s demolition, Michael Wolf and a social worker began knocking on doors. An accomplished urban photographer who worked extensively in Hong Kong, Wolf had focused exclusively on building exteriors. At the urging of friends he agreed to move inside, and in the space of only four days he compiled a compelling portrait of urban life.

In an interview with the New York Times’s Valerie Lipinski, Mr. Wolf said,

“I had the methodology worked out. You open the door, and you put the camera with one foot of the tripod inside. I used a small flash to bounce off the ceiling. I wanted to see into every corner. I took three or four photographs and moved on to the next one. If someone said no, I didn’t waste any time trying to convince them.

In total, I photographed 118 rooms. When I had them all printed, it was almost a new looking at these interiors, because while I was photographing, I didn’t have time to really look at what I was seeing.”

The visual impact of the homes’ small size and clutter can be overwhelming, but the words of the residents hardly communicate a sense of deprivation.  While taking his photographs, Mr. Wolf asked each resident a few questions:  How long have you lived here? What do you do for a living? Do you like living in Shek Kip Mei?

Today, Shek Kip Mei is gone, nearly all of its residents relocated into slightly larger living spaces within the same District.  A single block (Block 41, Mei Ho House) has been transformed into a youth hostel, preserved for its historical value and as a reminder of the resourceful people who lived their lives within its walls.

Pondering the Baldizzi apartment and the accomodations offered at Shek Kip Mei, I began to wonder: Exactly how large is a hundred square feet?

As it turns out, my dining area is almost exactly 10′ x 10′, if I don’t count a small alcove with built-in bookshelves. It’s an efficient, cozy space. My teak computer desk with its open hutch graces the east wall, a printer and scanner beside it. To the north, a large window presents an ever-changing view of water and sky.  Behind me sits a dining table that graced my parents’ home, and two vintage pressed-back chairs with caned seats that my mother restored.

Beyond the table, on the west wall, two Mission style cabinets hold antique china; to the south, a small Chinese tea cabinet holds battery chargers, candles, a few skeins of yarn, and piles of instruction manuals I intend to read some day.

Most of my at-home waking hours are spent in this space: reading, writing, or tending to business while surrounded by some of my favorite possessions.

It’s a comfortable room, but in the end it’s only a room: one of five in my 840 square foot apartment. Granted, I’ve lived in spaces that matched or barely exceeded the square footage of a room at Shek Kip Mei: a Catalina sailboat with less than a hundred square feet of living space, and a hill country cabin that held everything needed for comfort — a woodstove and bed, a propane stove, chainsaws and pumps, table and chairs — all tucked into an expansive 196 square feet of space. Of course, those small spaces were meant to be temporary. For much of the world, 10′ x 10′ isn’t a getaway but a way of life; a routine; an inescapable reality.

Today, I have space and light, the luxury of privacy, and freedom of movement. Just across the road, residents of a local nursing home are living out their own lives in one hundred square foot rooms, limited by age and illness as surely as residents of Shek Kip Mei or the New York tenements were limited by poverty and displacement.

Elsewhere, crowded into tiny trailers and rented rooms, survivors of California fires and Gulf coast hurricanes continue to rebuild their lives precisely as immigrants to New York, Boston and Minneapolis built new lives a century ago: one step, one day, at a time.

Seen from this perspective, my hundred square feet of space feels luxurious as any penthouse, and the creative simplicity of the Baldizzi family’s preparations for Christmas suit it perfectly. Clearing a stack of papers from the tea chest, I light my favorite oil lamp, setting it next to a small forest of burnished copper pines. Warmed by light from the lamp, my grandmother’s ceramic angels peer at me from atop the hutch, seemingly content.

As darkness falls and the wind begins to rise, I tuck my tape measure into a drawer, ponder Josephine Baldizzi, and smile at the advent of this new season. Christmas is coming, after all, and its spirit will find a dwelling in even the smallest or poorest of spaces.

Comments always are welcome. This edited post originally was published in 2013.

131 thoughts on “Homes Made For the Holidays”

New on Lagniappe ~ Rockport, Redux ~ A Most Unusual Blue