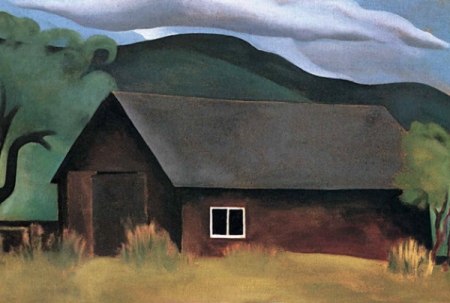 Had I discovered this small, straightforward painting hanging in a gallery, I doubt that I would have recognized it as the work of Georgia O’Keeffe: an artist I generally associate with big flowers, big buildings, and big landscapes.

Today, I know that O’Keeffe created My Shanty almost on a whim — as a bit of sly commentary, or even as an artist’s practical joke — but that knowledge doesn’t make her story of its genesis any less delightful.

The clean clear colors [of a Lake George shanty] were in my head. But one day as I looked at the brown burned wood of the shanty, I thought, ‘I can paint one of those dismal-colored paintings like the men. I think just for fun I will try — all low-toned and dreary with the tree beside the door.’

In my next show, ‘The Shanty’ went up. The men seemed to approve of it. They seemed to think that maybe I was beginning to paint. That was my only low-toned, dismal-colored painting.

As her trust in her intuitions developed and her methods matured, her observations grew more trenchant.

I had two [avocados] — not so perfect. I painted them several times, when the men didn’t think much of what I was doing. They were all discussing Paul Cezanne, with long involved remarks about the ‘plastic quality’ of his form and color.

I was an outsider. My color and form were not acceptable. It had nothing to do with Cézanne or anything else. I didn’t understand what they were talking about — why one color was better than another.

Years later, when I finally got to Cézanne’s Mont Sainte-Victoire in the south of France, I remember sitting there thinking, ‘How could they attach all those analytical remarks to anything he did with that mountain?’ All those entire words piled on top of that poor little mountain seemed too much.

When it comes to O’Keeffe’s own mountainous work, there has been an equal tendency to pile on words. Her 1974 publication of Some Memories of Drawings (a compilation of work done between 1915 and 1963, accompanied by personal comments about the influences behind them) was, at least in part, a reaction to what others had written about her.

I write this because such odd things have been done about me with words… I make this effort because no one else can know how my paintings happen.

When an opportunity to visit Crystal Bridges Museum of American Art presented itself this spring, I was delighted to find that the featured exhibit would be The Beyond: Georgia O’Keeffe and Contemporary Art. Presenting over thirty of O’Keeffe’s works alongside those of emerging contemporary American artists, it promised to be a day well spent.

Intentionally or not, the exhibit has been arranged in much the same way as O’Keeffe’s Some Memories of Drawings. Seeing the artist’s works juxtaposed with her words, not as large blocks of text but as epigrammatic quotations — some of which could fit on a refrigerator magnet — is especially effective.

Perhaps inevitably, the introductory painting in the exhibit is Jimson Weed/White Flower No. 1.  When Alice Walton purchased the painting at a Sotheby’s auction in 2014, her $44.4 million winning bid made it the most expensive work of art ever painted by a woman, and one of the most expensive works of American art. First displayed at Crystal Bridges on March 28, 2015, it provided a perfect introduction to the new O’Keeffe exhibit.

In flower paintings like Jimson Weed/White Flower No. 1, the influence of photographers Paul Strand and Alfred Stieglitz can be discerned. They contributed to O’Keeffe’s movement toward a style that, while rooted in realism, tended toward abstraction by virtue of techniques borrowed from their lenses and darkrooms: foreshortening, extreme closeups, lens flare, and cropping.

But convictions shaped her use of the techniques. In the exhibit hall, next to her luscious petunias and jonquils, these thought-provoking words are posted:

Exact realism does not equal awe. I had to create an equivalent for what I was looking at — not copy it.” 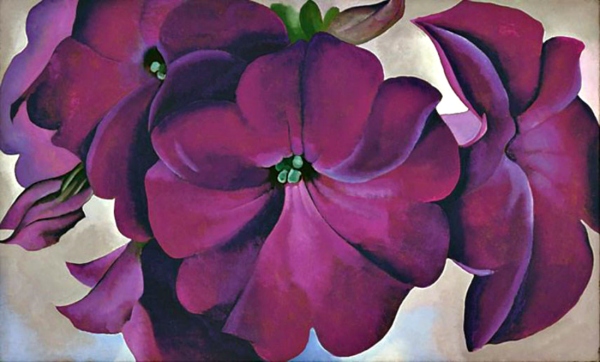 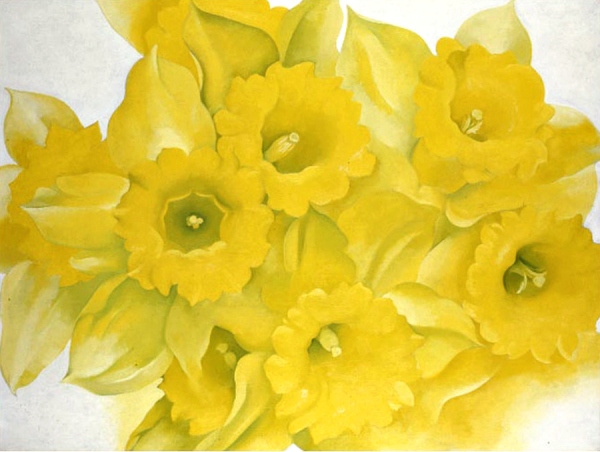 Of course, O’Keeffe was perfectly capable of portraying the world around her in a realistic manner. Her paintings of New York City, including views from the apartment she and Stieglitz shared in the Shelton Hotel at Lexington and 49th, offer recognizable scenes from a rapidly changing urban environment. 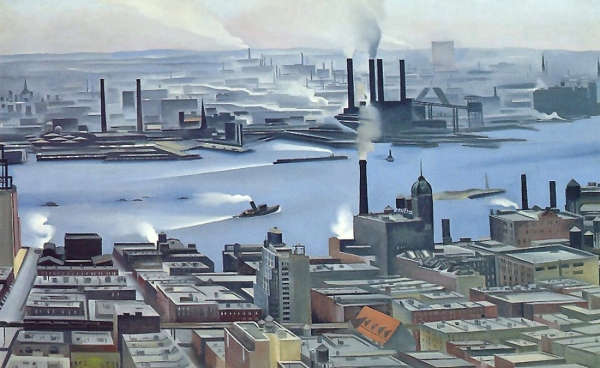 East River from the 30th Story of Shelton Hotel, 1928  (not included in the exhibition)

In other New York paintings, apparently straightforward images contain both personal references and hints of the natural world. Radiator Building, Night sets Stiegiltz’s name in red next to the Scientific American Building, while drifting steam from a nearby rooftop suggests the folds of O’Keeffe’s flowers.

At the time, so-called ’emblematic portraits’ were in favor. Images, sometimes realistic and sometimes abstract, conveyed information about one or more individuals without presenting an exact likeness. Radiator Building, Night is such a portrait; its buildings represent O’Keeffe and Stieglitz, with the red sign serving as a clue. 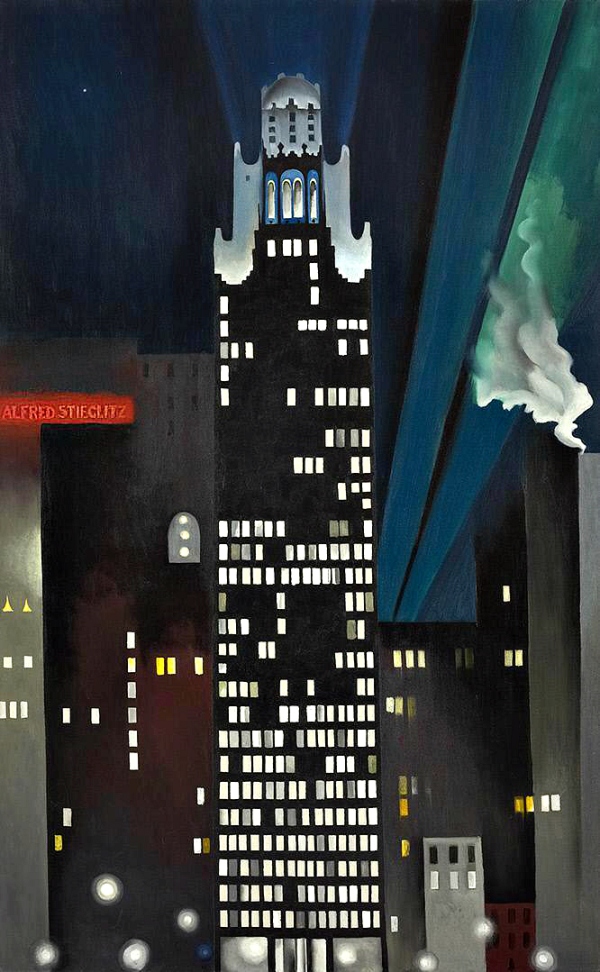 Traveling west, O’Keeffe found analogues for the towering skyscrapers of New York in the vast, expansive deserts and mesas of New Mexico: a connection acknowledged by exhibition curators who paired Radiator Building, Night with a series of evocative landscapes in a section titled “Cities and Deserts.”

Not until some time had passed did I recognize one relationship between my  favorite painting of the exhibition — Black Place II — and Radiator Building, Night.  The commonality is electricity: generated in the case of the New York skyscraper, but naturally occurring as lightning in the dark hills of the Bisti Badlands, about 150 miles northwest of O’Keeffe’s home in Ghost Ranch. Whether O’Keeffe intended to represent lightning, I can’t say: but she surely delighted in the phenomenon.

Today I walked into the sunset to mail some letters. After I mailed the letters I walked home and kept walking. The Eastern sky was all grey blue — bunches of clouds — different kinds of clouds — sticking around everywhere and the whole thing lit up first in one place then in another with flashes of lightning — sometimes just sheet lightning and sometimes sheet lightning with a sharp bright zigzag flashing across it.

I walked out past the last house and sat on the fence for a long time looking — just looking at the lightning. 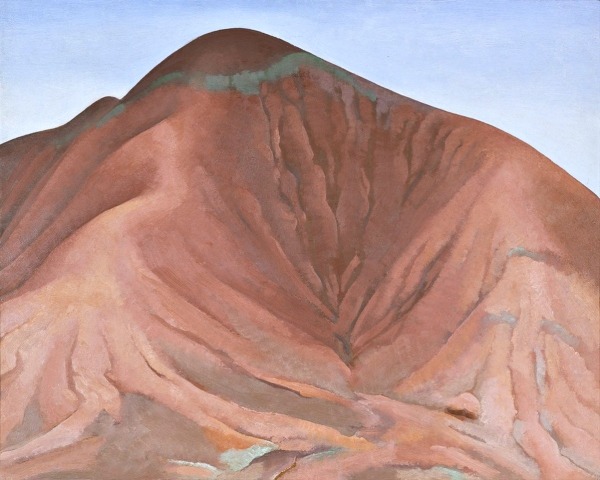 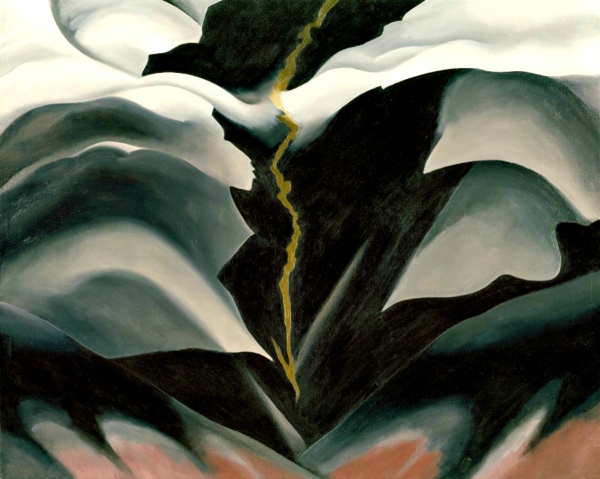 As an exhibition category, “Cities and Deserts” is straightforward enough, but “The Intangible Thing” is less easily grasped — until O’Keeffe’s own experience is considered.

During her years in Texas, and particularly during her time in Canyon (1916-1918), O’Keeffe wrote again and again about the delights surrounding her.  In a letter to Anita Pollitzer in 1916, O’Keeffe’s exuberant love of her new world shines:

I am so glad I’m out here – I can’t tell you how much I like it. I like the plains – and I like the [painting].  Everything is so ridiculously new, and there is something about it that just makes you glad you’re living here .

You understand, there is nothing here — so maybe there is something wrong with me that I am liking it so much. 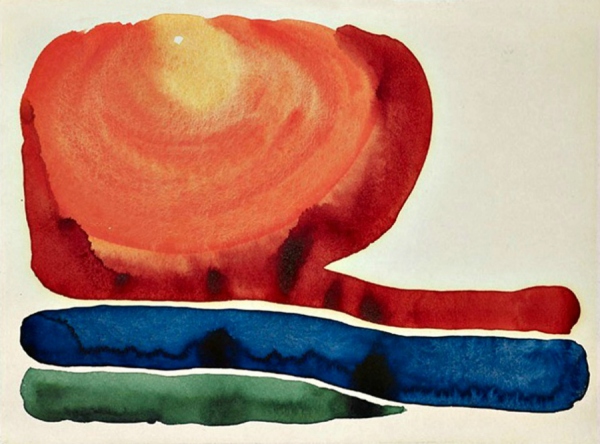 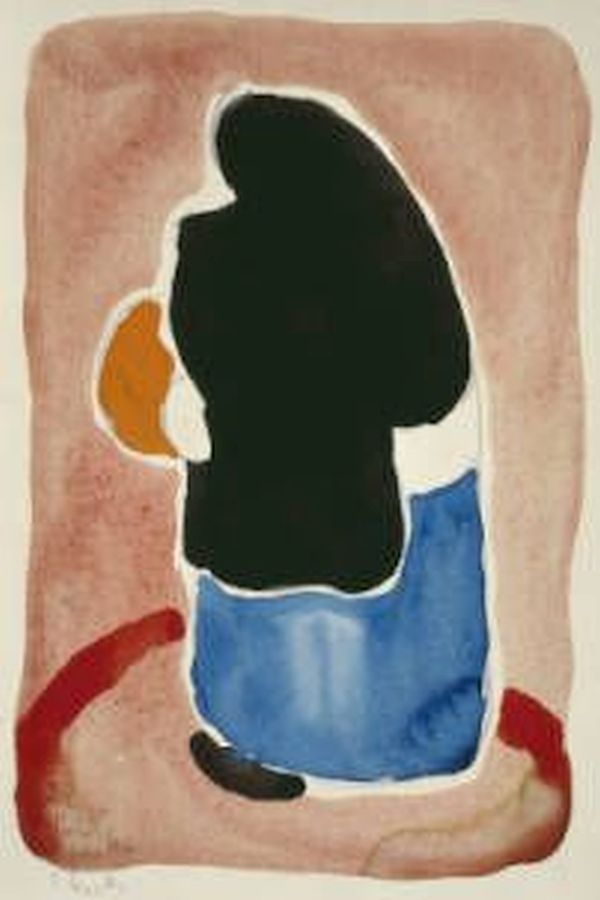 After moving back to New York in 1918, she spent time in an entirely different environment: Lake George. A number of paintings from those years, represented here by Maple and Cedar, Lake George, help to illustrate O’Keeffe’s musings about “the intangible thing.”

Objective painting is not good painting unless it is good in the abstract sense. A hill or tree cannot make a good painting just because it is a hill or a tree. It is lines and colors put together so that they say something.

For me that is the very basis of painting. The abstraction is often the most definite form for the intangible thing in myself that I can only clarify in paint. 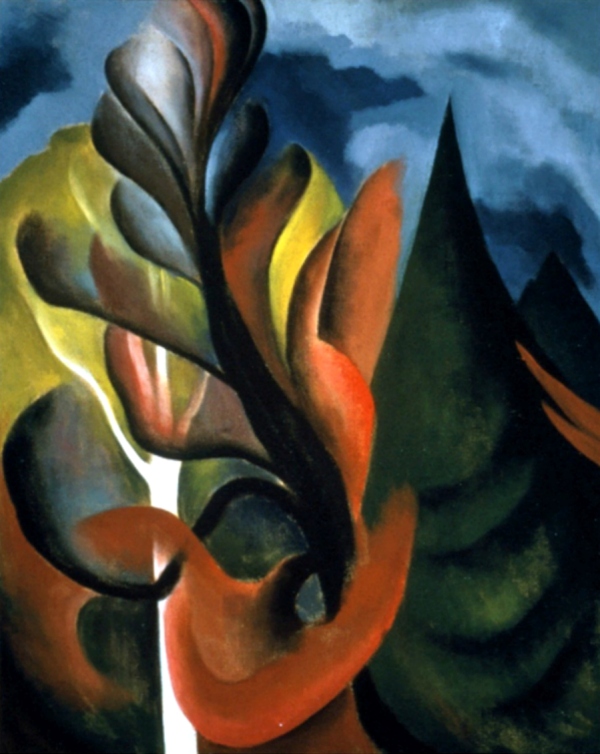 The thought that a section of The Beyond would be devoted to specific, tangible objects — still lifes — would seem strange only if you imagine still lifes to be limited to stereotypical vases spilling flowers onto a table, or bunches of grapes and nectarines huddled next to an overripe cantaloupe.

In O’Keeffe’s world, still lifes are more varied than that; more interesting; and never meant to depict the world with perfect realism. In the midst of her vision, her words resonate:

Nothing is less real than Realism. Details are confusing. Only by selecting, omitting, and emphasizing do we advance to the true meaning of things. 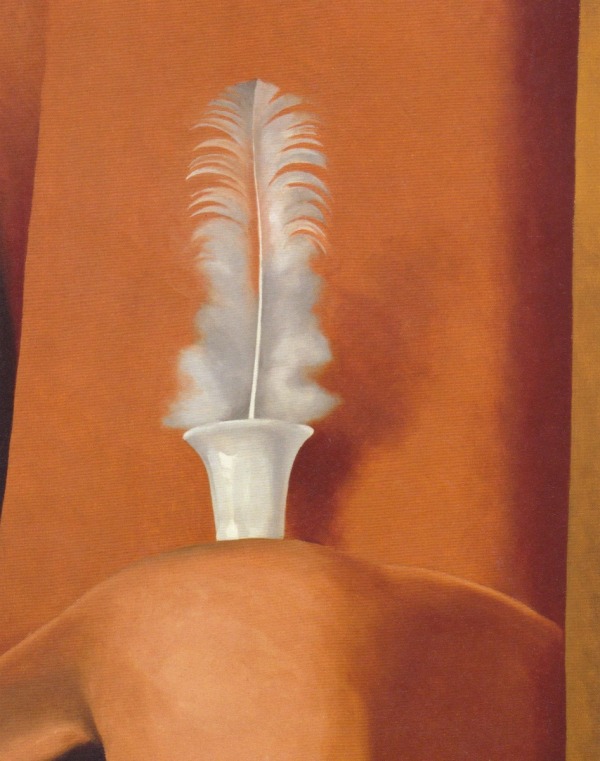 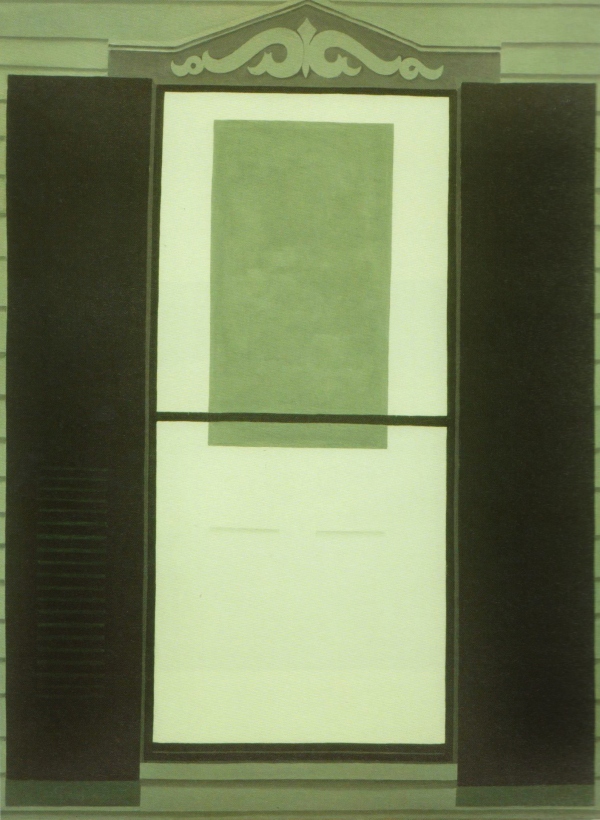 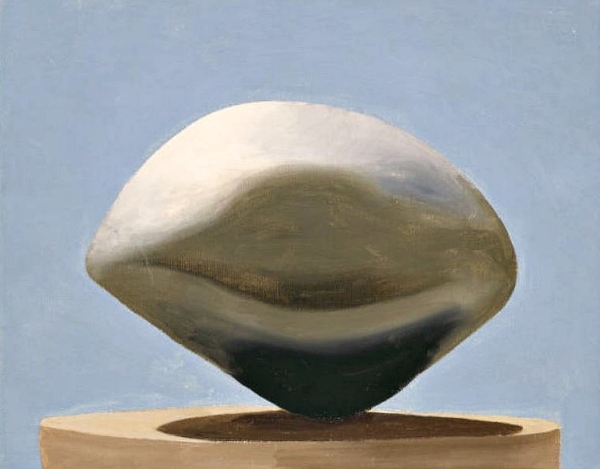 Rocks, skulls, bits of flowers, and feathers: the randomness of the natural world’s detritus helped to form O’Keeffe’s art. The impulse to collect and consider seems to have been as natural to her as breathing.

I don’t remember where I picked up the head — or the hollyhock. Flowers were planted among the vegetables in the garden between the house and the hills and I probably picked the hollyhock one day as I walked past. My paintings sometimes grow by pieces from what is around.

I have used these things to say what is to me the wideness and wonder of the world as I live in it. 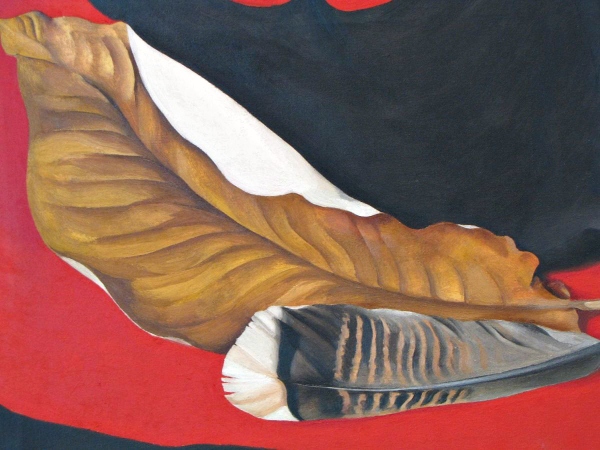 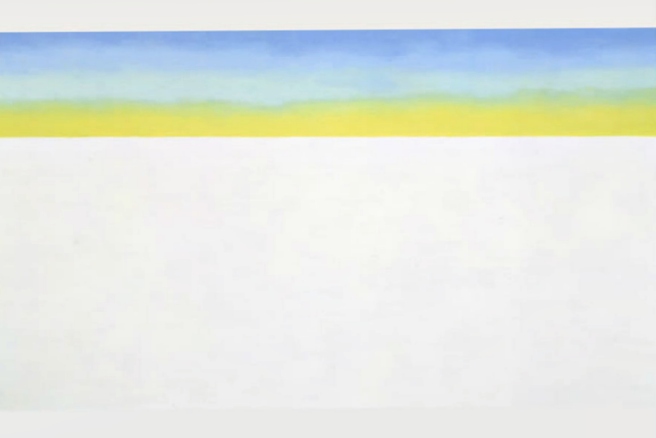 The painting seems to embody the thoughts O’Keeffe expressed years earlier, in a 1923 letter to Sherwood Anderson:

I feel that a real living form is the natural result of the individual’s effort to create the living thing out of the adventure of his spirit into the unknown.

From that experience comes the desire to make the unknown known. By ‘unknown’ I mean the thing that means so much to the person that he wants to put it down – clarify something he feels, but does not clearly understand..

As for the final painting of the exhibition, curators Chad Alligood and Lauren Haynes have this to say:

The title of the exhibition, The Beyond, comes from O’Keeffe’s last unassisted oil painting, which she completed in 1972. An abstract fugue of blue, black, and gray horizontal layers punctuated by a ribbon of white, the painting suggests a distant horizon, either darkening or lightening. 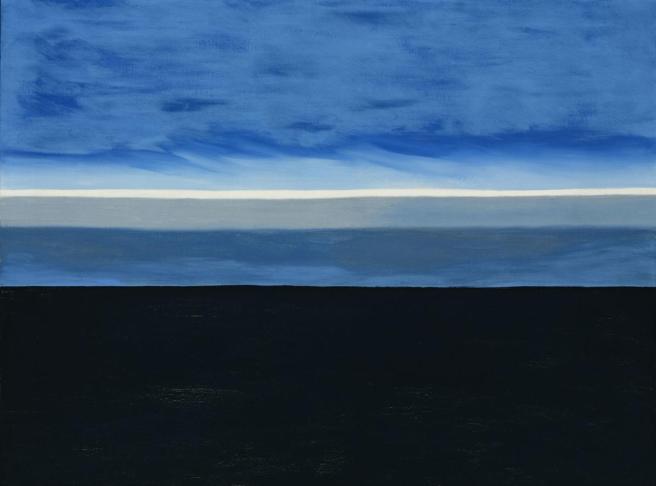 O’Keeffe had lost her central vision in the previous year, and she painted this work using only her peripheral sight. ‘The ‘beyond’ in this picture might represent what then remained just beyond the realm of her perception: what stood at the approaching horizon.

At 84 years of age, she must have been thinking, too, of what lay beyond her time on earth.

No doubt. But among the multitude of souvenirs being offered in the exhibition gift shop, I chose to forego a reproduction of The Beyond in favor of a trio of magnets bearing O’Keeffe’s words.  One recalls a young, feisty painter who turned away from low-toned, dismal shanties, and never looked back.

“I still like the way I see things best.”

135 thoughts on “Georgia O’Keeffe: A Way Of Seeing”