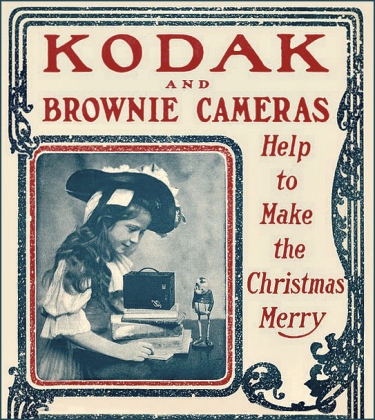 In a world still characterized by four-digit telephone numbers, 78 rpm records, and vacuum tubes that had to be carried to the hardware store for testing when the radio or television wouldn’t work, my first camera fit right in.

A Christmas gift, it was a simple Kodak Brownie — perhaps the Brownie Holiday, but more probably the slightly newer Model 127. Of course it required film, carefully loaded into the camera one precious roll at a time. There were knobs to turn, holes to match with tiny, mechanical teeth, and a certain amount of ruined film that went along with the learning process, since childish excitement often meant forgetting the first rule listed in the Brownie 127 instruction manual: “Take the camera into the shade.”

Learning to coax images from photographic film was an even more complex and fascinating process. My friends and I spent hours in our high school darkroom, a place whose conditions suggested nothing so much as the possibility of suffocation.

Lit by the glow of dim red lamps, shallow pans containing an array of chemical solutions marched across tables and counters. We spoke their names in hushed tones, like incantations — developer, stop bath, fixer — and hung our bits of paper like batches of tiny, magical laundry still dripping water and solution while a pervasive, vinegar-like tang flavored the air.

Despite our sense of exploring uncharted territory, we were only the latest in a long line of image-makers. We experimented with photography as a way to earn extra credit for chemistry class and have a little fun on the side, but the earlier creators of tintypes and platinum prints, Daguerreotypes, and ambrotypes had purposes of their own: developing new technologies, recording history, and exploring the artistic possibilities of an intriguing new medium.

We hardly think of those early processes today. Accustomed to the beauty and ease of digital photography, we capture, catalog, and convey the wonders around us with an increasing and almost stunning thoughtlessness.

Now that the whole of the modern world seems to be carrying a camera, it’s even easier to forget those early forms of photography, not to mention creative ways that earlier generations found to capture and share images of the world’s rich diversity.

John James Audubon (1785-1851) died just as photography was beginning to develop. Today, the organization which bears his name is  associated primarily with conservation, but Audubon still stands as one of our greatest wildlife artists. Of course those dedicated to honoring and preserving his reputation might be forgiven a certain prejudice in his favor, but I’d be hard pressed to disagree with their assessment of his artistic vision and skills:

In the days before photography, Audubon was not the first person to attempt to paint and describe all the birds of America (Alexander Wilson has that distinction), but for half a century he was the young country’s dominant wildlife artist. His seminal Birds of America, a collection of 435 life-size prints, quickly eclipsed Wilson’s work and is still a standard against which 20th and 21st century bird artists, such as Roger Tory Peterson and David Sibley, are measured. 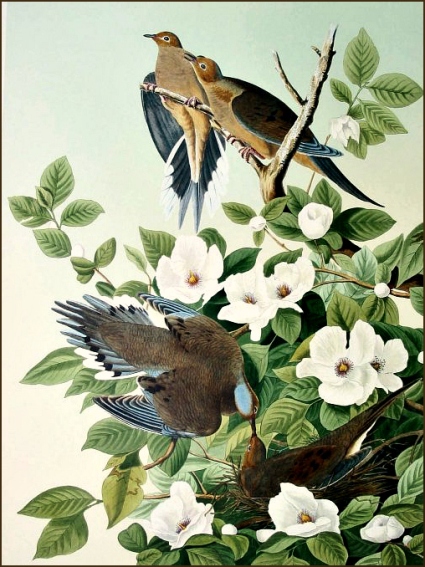 While Audubon may have been the best, he was far from the only artist dedicated to accurate and aesthetically pleasing depictions of birds. Etchings and oil paintings were common, as were chromolithographs: an inexpensive way for ordinary people to enjoy birds as art.

One of the most well-known examples, The Illustrated Book of Poultry, was published in 1890. Popularly known as Cassell’s Book of Poultry, it had text by Lewis Wright and illustrations by J.W. Ludlow.  Unlike Audubon, Ludlow specialized in domestic birds. He illustrated several books devoted to poultry and pigeons published by Cassell and others between 1867 and 1886, and reproductions of his work can be found in as many country kitchens as museums.

A multitude of other artists dealt in “fancy chicken pictures,” as my grandmother called them.  Harrison Weir, A.F. Lydon, Ernest Whipple, Louis Graham, and Edwin Megargee are just a few of the artists whose works continue to delight. A friend in the Texas Hill Country has examples of Megargee’s art in his workshop, and a few matching birds peck around outside.

Megargee’s work is especially interesting because of the role it played in the development of dinnerware as art. Pictures on plates were quite the fashion in early-1900s America, and images of birds were common. The work of Megargee and others was purchased by companies who produced the decalcomania (often shortened to ‘decals’) used by china manufacturers such as Homer Laughlin, Knowles, Taylor, & Knowles, Smith-Phillips, and a variety of smaller companies throughout the Ohio Valley and eastern United States, to decorate their products.

The two largest providers of decalcomania were Palm Bros. & Co. and Palm, Fechteler & Co. In 1894, individuals associated with these firms purchased a controlling interest in the capital stock of American Decalcomania Company and elected a majority of the company’s directors  The business was moved to Hoboken, New Jersey; at that point, the company motto apparently was changed to “Let the price fixing begin.”  (The history and disposition of the case can be found in the Atlantic Reporter.)

Despite a period of chaos, the business flourished, and artists such as Megargee flourished because of it.  Examples of their art still can be found. This Trellis shape plate by Homer Laughlin, produced in the 1930s, is an interesting combination of modern design and early 1900’s decoration.

Like chromolithography, these decals allowed ordinary people to add beauty to their lives at a fraction of the cost of original art.  Hand-painted Haviland is exquisite and a lovely table can be set with Limoges or Meissen,  but around 1900 many mass-produced American products began to bring smiles, too. While the shape of the blanks (the dinnerware pieces themselves) was standard, decorators often were free to combine decals, decorations, and hand-painted trim as they chose.  The results can be delightful.

Certainly the plates of the lithographer or the plates hanging on a collector’s wall never will be able to capture the sweep of a rising flock, the osprey’s dive, the intimacy of the nest, or the necessary dinner of the predator in quite the same way as the best photography.

But from Audubon to Ludlow, from the artist to the craftsman to the most anonymous worker on the decorating line at the factory, a necessary caution still applies. It is the eye, the heart, and decisions of the mind which make art — not technology.  If we enliven those three, the art will follow.

Comments always are welcome. The plates pictured are from my personal collection.

100 thoughts on “Those Almost-Photographic Plates”