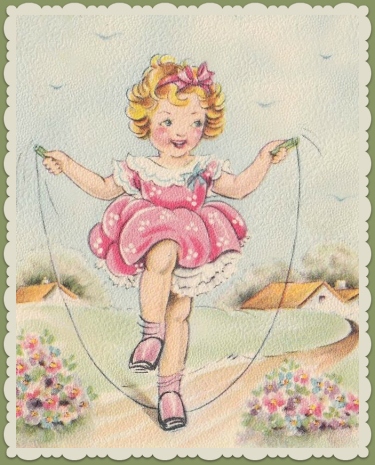 With a set of jacks, a hopscotch marker, and a jump rope in hand, entire afternoons could pass before anyone thought to say, “I’m bored.”

While we envied the skill of the Double-Dutching older girls, we took our turns at the single rope and were content. Pigtails and ponytails flying, we jumped to rhymes still known today: “Teddy Bear,” “Spanish Dancer,” “Cinderella.”

We giggled at verses filled with favorite beaus, kissing, marriage, and baby carriages, but the rhymes weren’t freighted with adult meaning. Their short, easily memorized lines were nothing more than markers for the entrance and exit of jumpers from the ropes.

One possible exception was a cautionary, sometimes taunting verse whose lines were bandied about well beyond the jump-rope circle:

Today, I’m aware that tripping on a crack might result in broken body parts, but the broken parts would be my own. I’ve broken a sugar bowl or two, but I’ve done it on my own — no hole required — and when I stepped on a rusty nail in a boatyard and required a tetanus booster, no one ended up incarcerated.

Still, children engaged in sorting out the world sometimes believe strange things, and a few of my chums thought the connection between sidewalks and broken spines just might exist. The believers were easy enough to spot. They walked to school with bowed heads: not praying, precisely, but watching their feet — determined, for their mothers’ sakes, to miss each crack, each hairline fracture in the sidewalk.

Sidewalk cracks didn’t bother me: at least, not after a friend and I tested their life-destroying power for ourselves.

One Sunday morning after church, while we waited for our mothers to finish their conversation, my friend grew pensive. “Have you ever done it?” she asked. “Done what?” “Stepped on a crack when your mother was around.”

I hadn’t, and even after she raised the issue, I wasn’t sure I wanted to. “No,” I said. “Have you?” She shook her head. “Well,” I said, “should we try it?” We looked at one another; at our mothers; at the sidewalk. “I don’t think anything will happen,” she said. Neither did I.

Getting up from the step where we were sitting, I walked over to the nearest sidewalk crack, and slid my toe across it. My mother kept talking, and my friend snickered. “You didn’t really step on it.” “Well, you step on it, then, and see what happens.” In a flash, she bounced up, jumped down, and landed on a sidewalk crack with both feet, looking at her mother as she did. When nothing happened, she began jumping up and down on the crack as enthusiastically as any rope-jumper.

The flurry of sudden activity caught our mothers’ attention. Turning to us, they said, “You kids must be ready to go home.”

On the other hand, even as we freed ourselves to walk the sidewalks of the world with impunity, we continued to struggle with other unwritten rules: most of which went unrecognized until the right set of circumstances brought them to light.

When my mother, an excellent seamstress, altered an old pattern for a back-to-school dress, she spent hours matching the crisp emerald and sapphire plaid in its knife pleats and dropping the waistline to just the right spot.

Over the course of repeated fittings, it became obvious that I wasn’t fond of the dress. In fact, I dreaded the thought of having to wear it to school. Finally, my grandmother intervened, asking what it was about the dress that I didn’t like. “It’s the colors,” I said. “Everybody knows that blue and green don’t go together.”

How I’d arrived at such an odd conclusion is impossible to say, but quite clearly I felt my new dress violated an unwritten rule about color combinations.

Before long, my grandmother, our family’s problem-solver extraordinaire, decided to set me straight. Leading me outdoors, she pointed to the trees in the front yard. “Aren’t they pretty?” she asked. I agreed that they were. In their late summer foliage, still full, leafy and green in the sunlight, they fairly shone.

Then, she pointed to the sky. “Isn’t that pretty, too?” I agreed that it was. “Well,” she said, “don’t you think the green trees and the blue sky belong together?”

Surprised by such a silly question, but already grasping its purpose, I said, “Of course they do.” With only the faintest hint of a smile, my grandmother erased yet one more unwritten rule: “Don’t you think your friends will wish they had a dress that looks like the trees and the sky?”

I remember and retell the story of my blue and green dress from time to time, particularly when issues of color arise. Most recently, it came to mind when a friend arrived for a dinner engagement dressed in a blue shirt and pure, snowy white pants. Puzzled by my sudden laughter, she said, “What? What’s so funny?”

“You’re from the midwest. You should know better. Look what you’re wearing.” It took a few seconds — but only a few — for her to begin laughing, too. “You’re right,” she said. “I’ve been down here so long I’d forgotten the rule. Back home, everyone still thinks it’s wrong to wear white before Memorial Day — or after Labor Day, for that matter. It’s just the way it is.”

Even while we still were telling tales and laughing over the silliness of it all, it occurred to me: someone ought to tell Mother Nature that white’s not right before Memorial Day. I think she’s ignoring the rule.

96 thoughts on “Unwriting The Unwritten Rules”