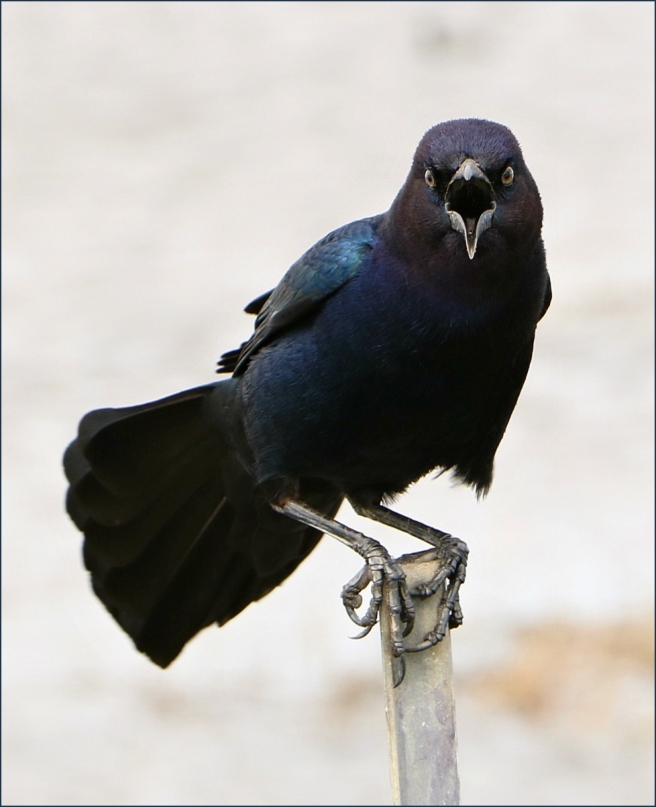 If his verse is any indication, Ogden Nash met his own grumpy grackle, and wasn’t particularly impressed:

The grackle’s voice is less than mellow,
his heart is black, his eye is yellow.
He bullies more attractive birds
with hoodlum deeds and vulgar words,
and should a human interfere,
attacks that human in the rear.
I cannot help but deem the grackle
an ornithological debacle.

Despite Nash’s characterization, the grackle I came to know as Mr. Grumpy didn’t seem inclined toward bullying or attacks. Though loud, impertinent, and insistent, he wasn’t at all aggressive. He only wanted to be noticed: preferably by a female of his own species. That hunger for attention and approval appeared to lie near the heart of his aggravation.

Like any fellow, he’d only wanted to spiff up a bit before heading out to impress the girls. With his choice of attire limited by nature, he’d thought a nice bath would do the trick. Unfortunately, as he pointed out with a lift of his head and a point of his beak, his favorite bathing pool had been taken over by this fellow. 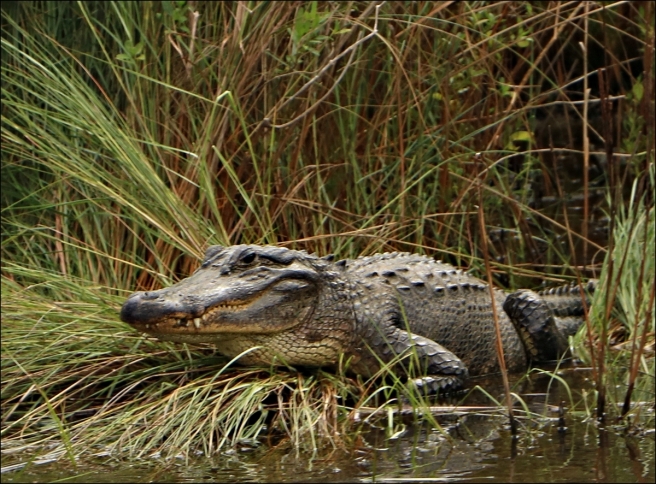 It’s a wise bird who knows his limits, and the Grumpster wasn’t about to engage in a fight with a creature who could flatten him as easily as he’d flattened the surrounding grass. But when I suggested a Plan B — finding another bathing pool — his response was swift, and wholly negative.

From his point of view, finding another pool would be impossible. Wading birds weren’t welcoming. Dabblers were jealous of their space. Cute and apparently benign, grebes diving for shoots and leaves were rumored to bite the feet of birds they considered intruders.

Deep waters in the middle of the slough were inaccessible to a grackle, and shallower water, replete with grasses, sedges, and reeds, had been overrun by moorhens and coots. Every suggestion I offered met with a more-or-less reasonable objection from an increasingly morose grackle.

“I enjoy living here,” he said.”But sometimes I feel like I don’t belong.” “We all feel like that from time to time,” I said. “but brooding won’t solve the problem. Maybe you need someone to run interference for you — someone able to run off a few birds so you can at least get a bath.”

The suggestion seemed to perk him up. “But who’d be willing to do that?” Scanning the water, I spotted an exchange taking place on the other side of the slough. “What about that old coot over on the north bank? The one giving the business to the youngster who was making a move on his territory? Why don’t you fly over and talk to him? He might be willing to help you out.” 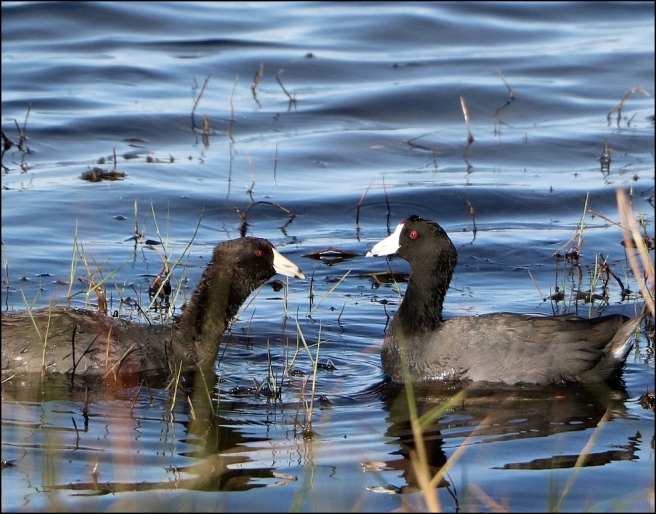 The youngster, at attention

“Oh,” he said. “I couldn’t do that. I wouldn’t want to impose, and besides — he looks as grumpy as I am.” “Well,” I said, “nothing ventured, nothing gained. Fly over and talk to him: unless, of course, you’d rather deal with the ‘gator.” Sighing, the grackle fluffed up his feathers. “Stay here,” he said. “I’ll give it a try, and see what he suggests.”

Before long, Mr. Grumpy was back. “Well?” I said. The bird gave me what I took to be a grackle-grin. “Just wait. The Old Coot was in the mood to raise a ruckus, and I gave him the perfect excuse.”

Before long, the pattering and whirring that signals the ridiculous half-flight, half-run of a coot crossing the water rippled toward us. Moving fast, the Old Coot appeared, in full pursuit of something. Precisely what, we couldn’t tell. 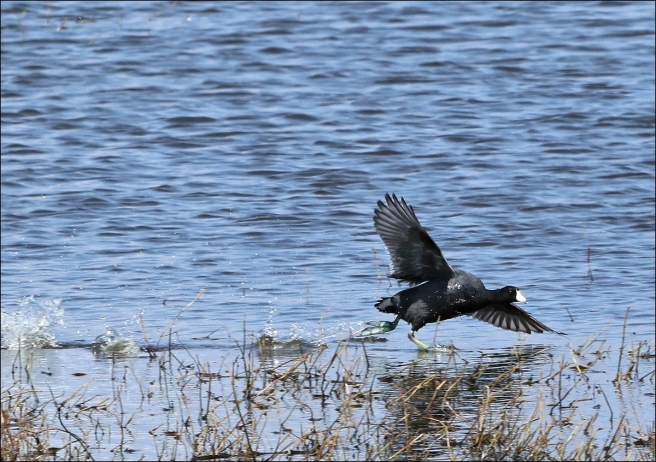 Before long, the tell-tale splashes and concavities of another coot’s passage appeared beyond the reeds. The chase was on, and the Old Coot clearly was gaining ground. 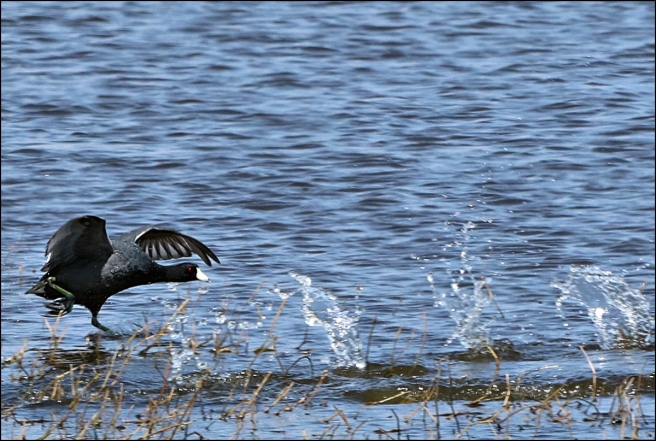 As the pair rounded a clump of bulrushes, we realized the old guy was putting on quite a performance; an entire group of birds was attempting to flee. In true coot fashion, neither pursuer nor pursued seemed able to lift from the suface of the water, and so they ran, in every direction, throwing up ill-formed, messy wakes. 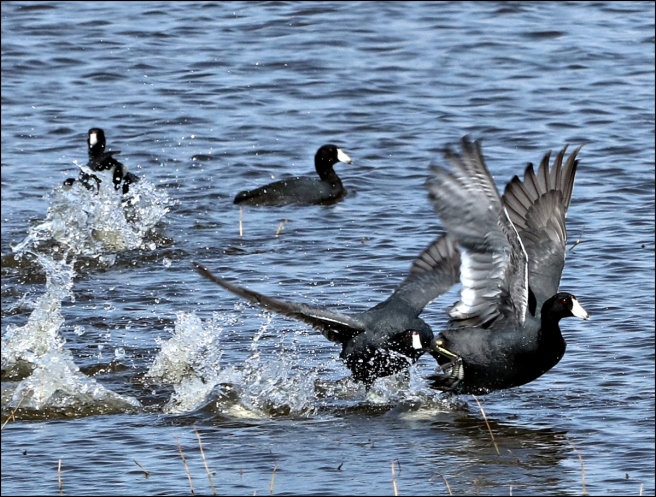 In the end, the last of the group made a final dash toward the safety of some reeds, and the fun was over. 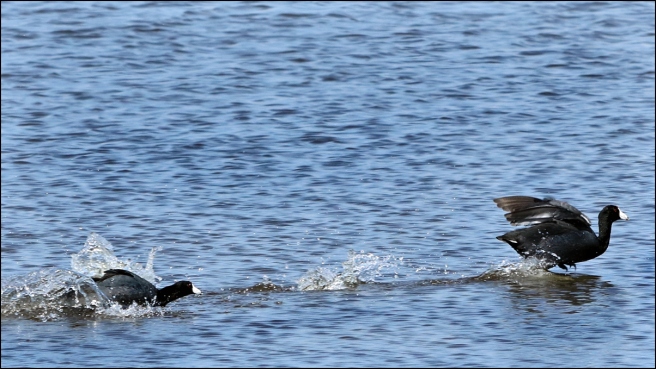 Fairly beaming with satisfaction, the Old Coot swam back to the bank to rearrange his feathers, and the no-longer-grumpy grackle grinned. “That was a pretty good idea you had,” he said.

I grinned right back. “It worked out nicely, didn’t it? There’s a fine, empty spot of slough now for you to take your bath. You’d better get at it, before the coots come back.” “I will,” he said. “Hang around, and I’ll do a fly-by after my bath, so you can see how handsome I am.”

Settling down into the water, the grackle looked first in one direction, and then the other, as if unable to believe his good luck. 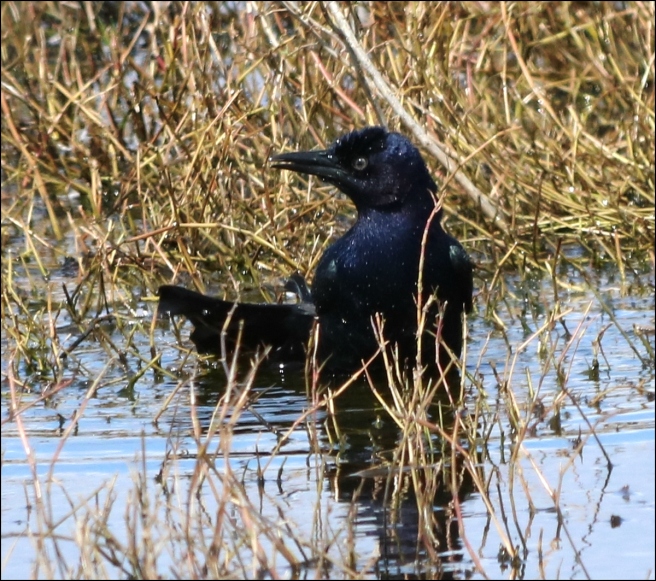 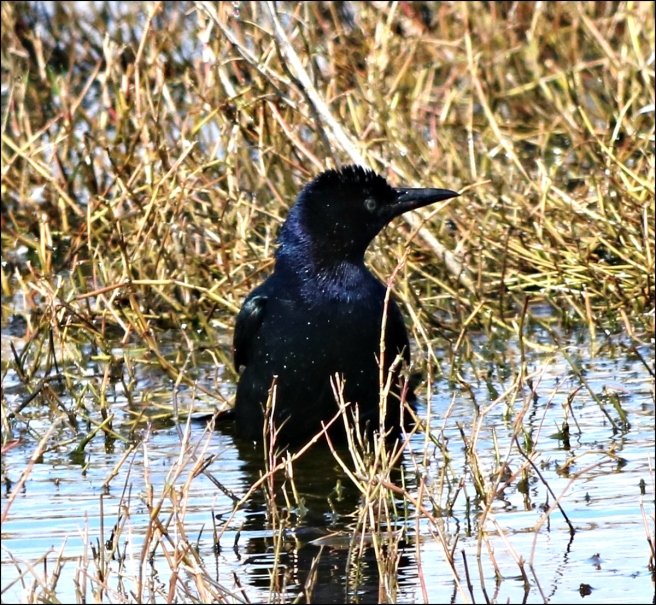 Once assured of safety and solitude, he began to bathe. The process created as much splashy havoc as the coots produced during their chase, but there was no one to object. 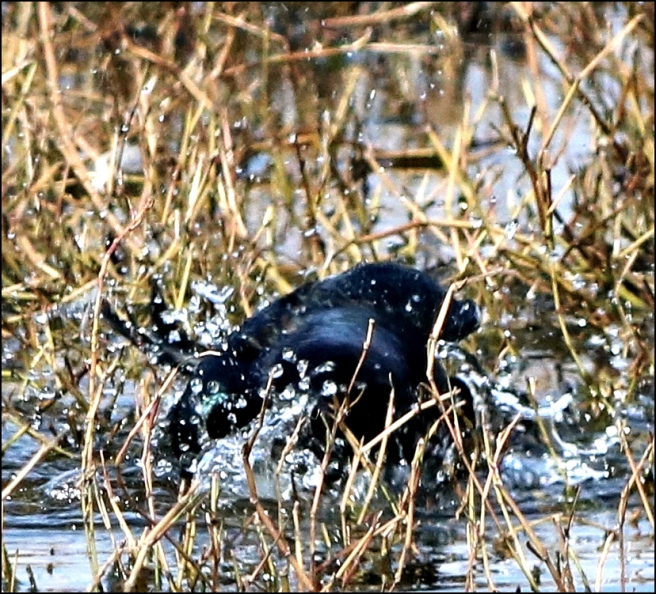 After five or ten minutes of what seemed to be pure enjoyment, he flattened his tail and swished it around: roiling the water as if with a giant paddle. 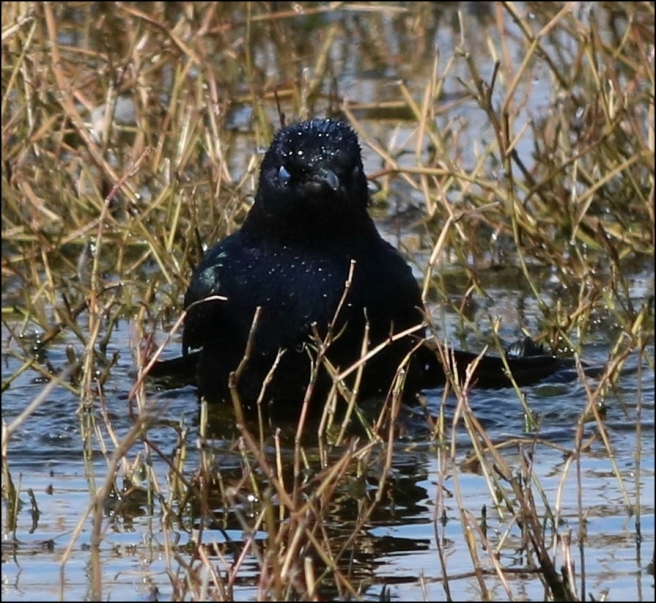 Satisfied at last, he stood, shook himself off, and took to the air, trailing droplets of water as he flew. Circling over the slough, iridescent feathers gleaming and glinting in the light, he banked over the old coot before coming to rest on a clump of nearby sedges. 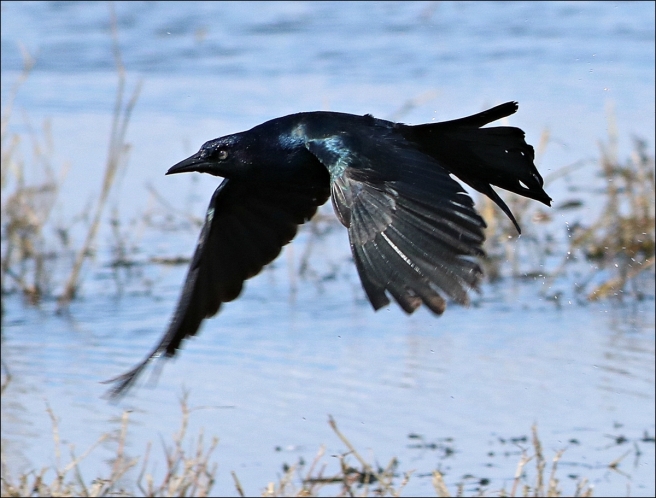 “Well,” he said, “what do you think?” There was no question what I thought. “I think you’re the most handsome grackle in all the slough, that’s what I think. Not only that, it’s getting late on a Saturday afternoon. I think you ought to get flying, and find yourself a date.”

“I believe I will,” he said. Then, just before lifting off, he fixed me with a look, grinned one more time and said, “Maybe now that I have these pretty, clean feathers, I can stop being so grumpy.”

Comments always are welcome.
The first part of this tale, which tells a bit about the life of the slough in general,  can be found here. 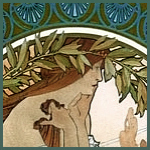